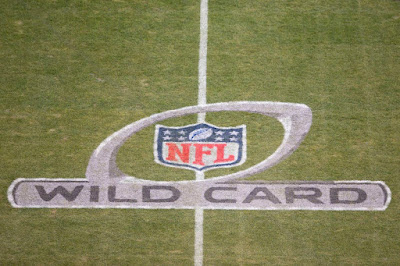 At long last, the NFL Playoffs are here.

On Saturday, the Las Vegas Raiders will travel to Cincinnati and look to slow down the high powered air attack of the Bengals, who won the AFC North division. The Raiders have won four straight games that enabled them to earn a wild card berth and they won that thrilling overtime game last Sunday night against the Los Angeles Chargers on a last second field goal.

The Raiders are led by quarterback Derek Carr and his main target includes tight end Darren Waller and wideout Hunter Renfrow. The top running back is Josh Jacobs, who came back from injury last week to gash the Chargers defense for 132 yards and a touchdown. As for the Bengals, QB Joe Burrow has been the hottest passer in the NFL in recent weeks, teaming with WR Ja'Marr Chase, who set a rookie record for receiving yards in a single game against Kansas City two weeks ago with 266 yards and also caught three TD passes from Burrow.

Saturday night features the New England Patriots at the Buffalo Bills and these two teams split their two games this past regular season. The weather could be dicey again like their game on Monday Night Football in early December. The Pats won that one by rushing for over 200 yards and passing the ball just three times.

The Bills and their offense features QB Josh Allen and wideout Stefon Diggs along with running back Devin Singletary, who had a pair of rushing touchdowns last week. New England has struggled of late on offense with the exception of a 50-10 blowout of Jacksonville, with rookie QB Mac Jones struggling with turnovers and being pressured. The Bills will look to do just that and force the rookie signal caller into making mistakes. This game could be a tight one, especially if the weather turns nasty.

On Sunday, the Philadelphia Eagles travel to Tampa Bay and will face the defending champion Tampa Bay Buccaneers and the league's leading passer Tom Brady, who has seen and done it all in his phenomenal 22-year career.

The Eagles have ramped up the running attack after a slow start this past season, which included a 28-22 loss against Tampa Bay in Philly back in October. Eagles QB Jalen Hurts is a dual threat with the football, but along with Miles Sanders, Boston Scott and Jordan Howard, forms a formidable rushing attack for the Birds. Everybody knows about Brady and his offensive weapons, including WR Mike Evans, tight end Rob Gronkowski and RB Leonard Fournette. However, not having WR Chris Godwin (knee injury) will likely have an impact as he led the team in receptions and receiving yards this past season. Look for Brady to go to Gronk and Evans (14 TD receptions) when they reach the Red Zone.

The San Francisco 49ers and Dallas Cowboys will renew a historic playoff rivalry in Big D this Sunday afternoon and it will be a battle for sure. The Cowboys have the league's highest scoring offense (530 points) and can pass and run the ball. But the 49ers defense has been stellar in recent weeks as they ripped off four wins in the final five games to get into the NFC playoffs.

Look for the 'Niners to get after Cowboys QB Dak Prescott and limit the big plays Dallas thrives on. The 49ers offense will look to the rushing game with Elijah Mitchell, Deebo Samuel and perhaps Trey Lance in certain instances. Samuel averaged over six yards per carry and caught 77 passes for 1.405 yards while scoring 14 TD's in the regular season, six receiving and eight rushing. Tight end George Kittle is another prominent target for QB Jimmy Garoppolo. Meanwhile, the Cowboys will look to Prescott (37 TD passes) to spread it around to CeeDee Lamb, Amari Cooper and TE Dalton Schultz while mixing in the run with backs Ezekiel Elliott and Tony Pollard.

The Sunday night game will be the Kansas City Chiefs hosting the Pittsburgh Steelers, who squeaked into the post-season with a win on Sunday in OT and then sweating it out in the closing seconds of the Chargers and Raiders game that DID NOT end in a tie, allowing Pittsburgh in the playoffs.

The Chiefs throttled the Steelers just three weeks ago to the tune of 36-10 with Patrick Mahomes doing his thing and the defense making life miserable for QB Ben Roethlisberger and company. Kansas City simply has too much fire power, even for the strong Steelers defense, which features NFL sacks leader T.J. Watt (22.5 sacks) and a ball hawking secondary. If K.C. gets off to a quick start and Mahomes can hook up with his two main targets (Tyreek Hill and Travis Kelce), this one could get ugly again. Pittsburgh has to try and dictate the tempo at Arrowhead Stadium to have any chance at all in this one.

The Arizona Cardinals and Los Angeles Rams will do battle at SoFi Stadium on Monday night in the first ever third day of the wild card round. Look for Aaron Donald and the Rams defense to get after Cards QB Kyler Murray and force mistakes as they did in the teams second meeting when the Rams won, 30-23 in mid-December.

The Cardinals have to force things and let Murray get it going as they did in a 37-20 blowout win against L.A. back in October at this same venue in Los Angeles. The Cards have some weapons but are without WR DeAndre Hopkins and might not have RB James Conner (18 touchdowns this season) for this game. Conner has been dealing with sore ribs and a heel injury as well, so he could be a game time decision. The Rams have QB Matthew Stafford and his favorite target Cooper Kupp, who had a monster season with 145 receptions for 1,947 yards and 16 touchdowns. Stafford was solid for the most part this season, but has been a turnover machine in recent weeks, including three straight games with multiple interceptions thrown.