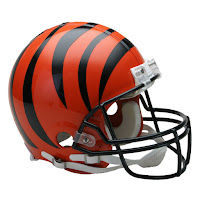 Outlook for 2022 season - The Bengals had a magic carpet ride all the way to the Super Bowl last season and whether they can repeat that effort will depend on Burrow and the offense making it happen. Head Coach Zac Taylor knows this team can score points with a good mix on offense and Burrow having the knack for making big plays in the clutch.

The defense was a concern at times last year, but did get a good amount of turnovers in the playoffs that allowed them to almost win it all. The Bengals registered 42 sacks and had 13 interceptions and drafted two defensive backs in the off season. The team also brought in numerous free agent offensive lineman to help improve the protection for Burrow, who was sacked way too much a year ago.

As long as key players on both sides of the football stay healthy and the team keeps it balanced on offense while giving Burrow time to do his thing, there is no reason to doubt the Bengals winning the AFC North division title again. Baltimore is the biggest threat, but Cincy throttled them twice last season. A return trip to the Super Bowl is possible, but a lot has to go just right in 2022 for that to happen.

Week One - vs. Pittsburgh