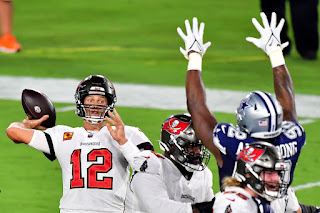 Tampa Bay quarterback Tom Brady (pictured at left) threw for 379 yards with four touchdowns and two interceptions while Cowboys QB Dak Prescott had three TD passes and one interception along with 403 passing yards in the loss.

The Pittsburgh Steelers surprised the Buffalo Bills, 23-16 for the road win as their defense limited the Bills to just two field goals in the second half to erase the 10-0 halftime deficit. Steelers QB Ben Roethlisberger had a TD pass and Ulysees Gilbert scored on a blocked punt as Pittsburgh scored 17 points in the final quarter to make the difference.

The Kansas City Chiefs stormed back to win at home, 33-29 against the Cleveland Browns after trailing 22-10 at the half. Kansas City QB Patrick Mahomes had three TD passes and 337 yards passing along with a TD run to lead the way in the second half. Mahomes hooked up with tight end Travis Kelce twice on scoring passes and had a 75-yard TD pass to wide receiver Tyreek Hill (11 receptions for 197 yards). Browns running back Nick Chubb scored two rushing touchdowns in the loss.

Arizona crushed the host Tennessee Titans, 38-13 with QB Kyler Murray running for a touchdown and passing for four more scores as the Cardinals compiled 418 total yards of offense. The Cardinals defense limited Tennessee to 248 total yards in offense and linebacker/rush end Chandler Jones had five quarterback sacks in the blowout win.

The Los Angeles Chargers pulled off a road win at Washington, 20-16 with Austin Ekeler scoring a rushing TD and QB Justin Herbert throwing for one while the defense held Washington to just 259 yards in total offense . . .   The Houston Texans blasted the Jacksonville Jaguars, 37-21 as QB Tyrod Taylor had a pair of TD passes to offset rookie QB Trevor Lawrence's three touchdown passes, along with the rookie throwing three interceptions in the loss . . .   The Cincinnati Bengals outlasted the visiting Minnesota Vikings, 27-24 in overtime as kicker Evan McPherson drilled the game winning 34-yard field goal with five seconds left in OT . . .  The Los Angeles Rams routed the visiting Chicago

Bears, 34-14 in the Sunday night game as QB Matthew Stafford (pictured right) had 321 passing yards and three touchdowns . . .  The Philadelphia Eagles crushed the host Atlanta Falcons, 32-6 as QB Jalen Hurts threw three touchdown passes and the Eagles rolled up 434 total yards of offense . . .  The Denver Broncos rolled past the New York Giants, 27-13 as QB Teddy Bridgewater had two TD passes and RB Melvin Gordon scored on a 70-yard run while Von Miller had a pair of QB sacks to pace the road win . . .  The San Francisco 49ers built a huge lead and then held off the host Detroit Lions fourth quarter comeback effort in a 41-33 win. San Francisco quarterbacks Trey Lance and Jimmy Garoppolo each threw for a TD and the defense scored a touchdown on a pick six from Dre Greenlaw. Lions new QB Jared Goff had three TD passes and an interception in the loss . . .  Miami won a squeaker on the road, 17-16 against the New England Patriots. Dolphins QB Tua Tagovailoa scored a rushing TD and also had a passing score in the win . . .  The Carolina Panthers toppled the visiting New York Jets, 19-14 with QB Sam Darnold burning his former team with a TD pass and run to lead the way. Jets rookie QB Zach Wilson had a pair of TD passes and one interception in the loss . . .  In the Monday Night Football game, the Las Vegas Raiders beat the visiting Baltimore Ravens, 33-27 in overtime on a 31-yard touchdown pass from QB Derek Carr to WR Zay Jones. Carr passed for two scores and had one interception in the win along with 435 passing yards. Baltimore QB Lamar Jackson passed for 235 yards with one TD and also rushed for 86 yards, but lost a fumble in the OT session that the Raiders were then able to take down the field for the winning scoring drive.